Another day with Fever...

I feel like I am standing on the beach, facing the ocean and waves caressing my feet..
Every new wave brings a little bit of novelty.. A new experience.

But every few minutes, I also have to move to find better footing. As every wave, however nice it may feel, is silently eroding my foundations away.

I don't know whether I should construe the persistence of the waves that keep coming one after another as another opportunity at joy? Or be wary at the fact each wave is weakening my stand!
I just don't know.

Last few weeks have been testament to a tumulous start to another new year.
Every month, atleast twice, Aarav has been unwell.
Illness goes on for a week and one can count a week of convalescence after.
And then a week of trying to get back to where we left off. So instead of studing anything new, we now are just revising the old ones.
And even before we get set to go ahead, back comes another round of illness.

We take a step forward, make a small progress and then we get pulled two steps back.

Two days before, Aarav's fever touched 105.7°F.
We gave him sponge baths with cold water and the fever came down to 103°F. A few midnight hours of wiping and worrying, Aarav's fever was down to 101.1 °F... Which was relatively much better.

With fever, came some other issues.
No eating. Crankiness. Annoyed all the time. Lost weight. Lost strength.
Sigh.

I know this post is just a whine. But dear lord! Can't we just get a break? Atleast spare the poor kid.

Have any of you parents ever felt this way?
Sigh.
I can't find a happy place..
Trying to concentrate only on the half glass full now.

Aarav doing wheelies on his trike. 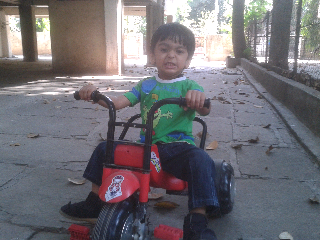 After our last assessment, all of us had started making Aarav repeat pretty much everything he should be saying. 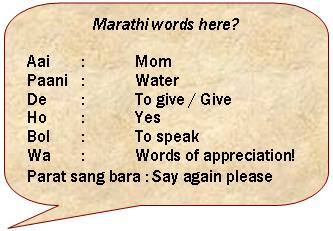 He already knew individual words but the issue was to string them together to make a valid sentence.

Where we were going wrong was, that we let Aarav's single word commands like "Paani", "Up" etc help him get through the task.

And Aarav also knew that we understood his babbles..
So he had no need to work on his words more at all!!

Now to make Aarav 'speak', was to make him repeat the entire sentence and only after he repeated it, then do his bidding.

So this is how we started it..

We have been doing this for days now.
To keep him interested in speaking, and making him repeat the words without getting irritated, we now resort to repeating three times only.
And then repeat the same again the next time he wants the same thing.

After a lot of frustrated moments for Aarav, lot of irritated expressions and half words from Aarav, He has now understood that we mean business.
He has to say it now to get it..

On Sunday evening, Aarav was watching TV. I was sitting on the sofa a few feet away
Neither of us were specifically looking at each other.

Finally!!!
Aarav now asks for water saying this : "Aai Pani De."
This still needs to be reinforced every now and then, he goes back to gesturing at times. But one small step at a time, I say!!

The short version of the Cochlear implant documentary film 'Awaaz aala' which also stars Aarav, will be telecast on NewsX channel tomorrow at 8:30am and 8:30pm IST.

More details when I watch it myself tomorrow.
I'll try to make a copy and upload on YouTube later.
Posted by Jui Moghe-Shewale at 2:17:00 pm 1 comment: