Aarav has been stuck at Ba since he was 13 weeks old (hearing age)..

We checked in his therapy session if he is able to hear his lings and vowels properly.
He heard everything correctly and even tried to reproduce what he heard but the new syllables were still missing.

So his therapist tried to give him a few visual cues, like the lip movements for Pa, tha.
On seeing the lip movements Aarav was able to very slightly imitate them.
The sound did not come as clear as his usual syllables but there was an accountable effort.

He has been stuck too long on Ba here.
See what the situation was at ---
13 weeks was only Ba... Click here.
Then he lost his EEs .. Click here.
And then found the EEs again at 14 weeks.... Click here.
Click to see that Aarav learnt to say Thank you..
And click also to see that he also to scold me and say Nako and Baas..
But all the words learnt were combinations of lots of musical word like babbles with Ba somewhere present.

So just to be sure that there are no map issues or any other issues, I asked his Therapist and Audiologist whether he should be having new syllables in his babble by now..

Our Audiologist said that the map may not be the issue here if he is able to hear them.
It is just about being able to reproduce them now..
Aarav now has to learn to play with his voice.
He needs to explore and learn how to use his voice to create new sounds, any play exercise should work to make him generate new sounds...

He does hear them and his babbles do resemble the words, but if he does not know how to generate a certain sound, how will he be able to create it !!??
So now apart from usual therapy and word association, we now have to help Aarav to just make new sounds and encourage him to exercise his vocals ..
From these new garbled babbles new syllables should come in...

I started forcing Aarav to give me hugs when I want them since last few weeks.
However, to be fair to him, I usually ask his permission.

And then the cuddling starts.. Then when I sense that Aarav wants me to stop, I ask "Aarav baas ka? nako ka? sodu ka tula?"
(Aarav, had enough? Should I stop? Should I let you go?)

Yesterday evening, Aarav was in a rather talkative mood.
He came up to me, and took my face in his hands and babbled my permission and gave me the biggest kisses ever!!!

Well.
A few hugs better than none!!

I always knew that boys were genetically programmed to love fast study vehicles.
Aarav's toy preferences prove the same. He clearly is biased towards selecting cars over other toys, especially the ones that survive his riding attempts as he wants to actually sit and ride the toy.

However, what I had not expected was, that Aarav would take pretend play to that level!!
Yesterday, Aarav reached new levels of motor skills expertise..He is now not just running, but DRIFTING... 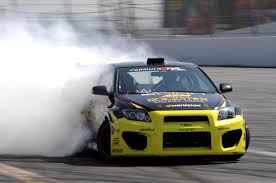 Aarav is now pretending to BE a car and doing 'Tokyo Drift' stunts in the house.
His running speed and maneuverability surpasses most supercars by now.
He narrowly misses tables, stools, walls, toys on the floor, overhead obstructions like parents trying to catch him with utmost precision.

More nerve endings fried per second from now on.

AB has promised to replace the cracked piece asap..
Their response has been immediate.
Love them for that!

Last week Aarav's aqua mike stopped working.
Well, I don't exactly know if it is the mic that has the problem or the Aqua mic's chord.

Apparently, Aarav finds the Neptune's chords more delectable than PSP chords.
So as of now, we are waiting for AB to send an extra mic and chord to the KEM Big Ears center so that we can check what has gone wrong.