I am extremly happy that the government is thinking on these lines. But have they thought about everything??

It is one thing to support the CI surgery but nowhere does it mention about continued support..
For those who cannot afford petrol.. giving them a free Ferrari will always feel awesome but for how long? Wont it last only till the fuel runs out?

What next?
What of maintainance?
What of speech therapy and accompanied costs?
What of life time support?
Who bears the brunt of these costs? You add taxes on the common man or use the black money from the pockets of the babus (rotfl) ??
Do you think you can get a working NHS system to regulate the usage?
Do you plan to have insurances for medical support devices??
How do you plan to create awareness and education to those classes to understand what they are getting into??

So, dear Govt, forgive me for being a cynic, but you let these kids get a CI surgery and no promises of support??

So in the veil of help, you finance a bottom of the line implant that destroys residual hearing for these kids, basically kill what exists if any, push them into hearing world and then abruptly pull them out and think it is their fault? Then you blame the parents who in turn will blame our good doctors who too will now be beaten and burdened from both your government's beurocratic rules and the wrath of ignorant parents.... and not even get paid for it..

Do you even know how much the cost of maintainance of a CI life is??

Instead of pointing them to a sign language life, that might be financially a better option for those who can barely make two meals daily (150£ monthly income let me remind you) you now expect them to cough up money to maintain them.

If this part has not been thought out, then this will fail. It is inevitable.
Is it now worse than what they had?

But if they have considered it, then think about how this will in turn affect those who are paying.. ie the rest of us who earn say 151£ mnthly????

As far as I have heard, this plan is a old attempt already done in Kerela etc and failed.

Look at the big picture. I do wish Cochlear implants to reach out to the masses, but if this does not get the needed financial support later on, this will be bad publicity for CI.

It feels like a bungee jump with dental floss tied across the feet. I am scared for them. Very scared.

Whether it is progress or a gimmick or a potential threat to the good name of Cochlear implants... I am a little skeptical.

I pray that I am wrong and things go well. Time will tell.... 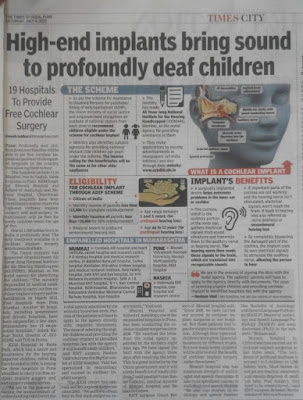 Email ThisBlogThis!Share to TwitterShare to FacebookShare to Pinterest
Labels: Cochlear Implant, From the Heart of a CI mother..., Speech therapy, Surgery