We had the one year progress report today!!

Aarav's progress graph has been upward and he has done well. The Therapist, Surgeon and the Audiologist all were present for his progress report.

Before the report we did a unaided hearing test. Aarav way put in the sound booth and this time we used big head phones instead of inserts.
Aarav liked the headphones and wore them without any complaints! 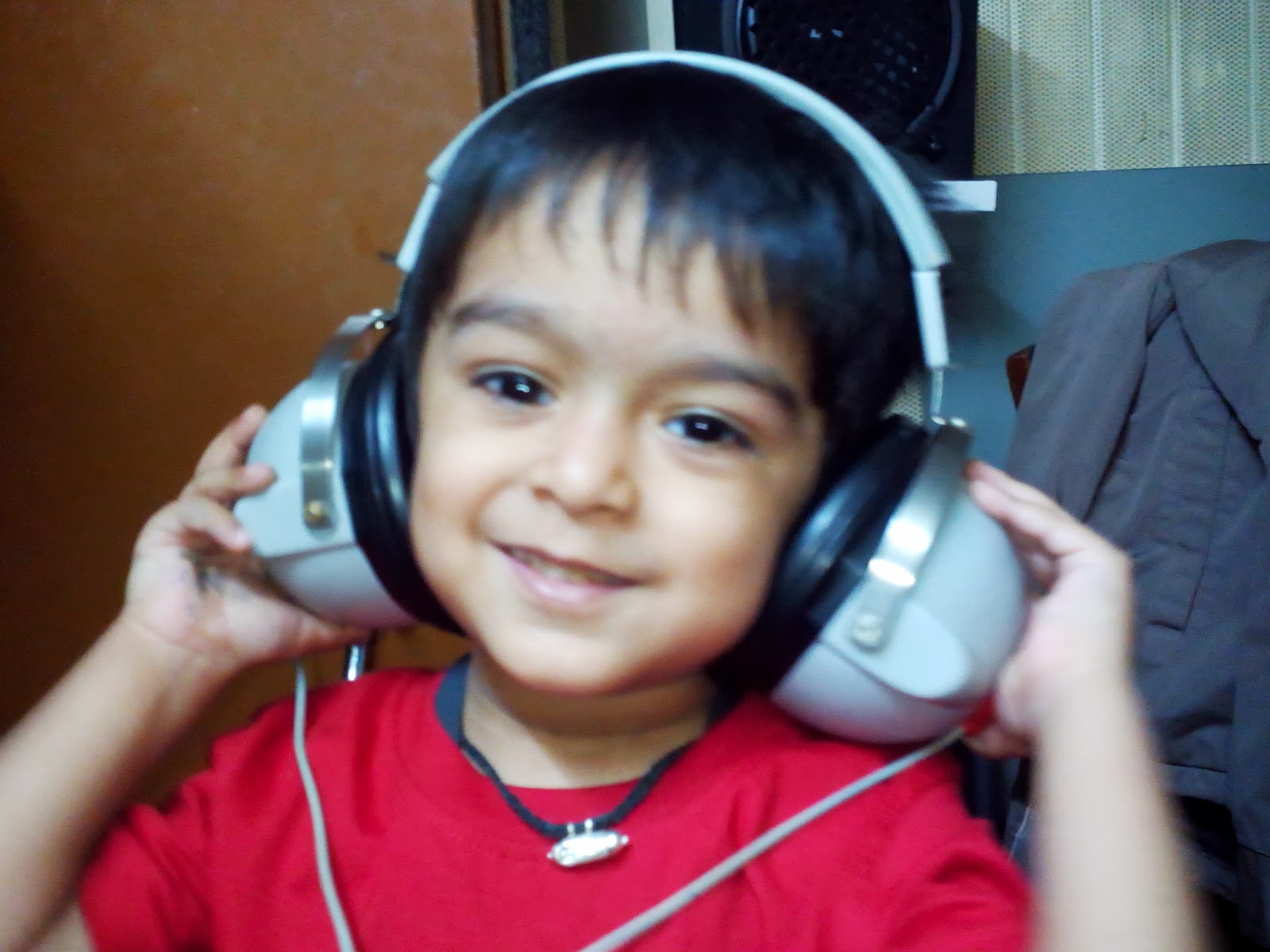 We then compared his current audiogram with one that we had done before the surgery. There is not much difference!!
Diagnosis for both ears is the same of course, Profound bilateral hearing loss. But the same graph before and after surgery! So that means his right ear still has the same level of hearing as before his surgery.


He did not respond to a specific frequency (aa sound) on this test though, which was present the last time. But we will be testing him once again to confirm this. Especially since he got bored in between the tests and chances are that he may not have responded properly. There could also be the possibility that the last time when we had tested his hearing, he may have responded out of habit and not hearing.. So we do need to test that frequency again.
That being said, as there is no response to only one frequency and we saw responses to all others, it means that he still has the same level of hearing as before surgery.
If the surgery would have affected his residual hearing, then all frequencies would have been affected and not just one.

So the good news is.. Aarav was still able to hear from his right implanted ear and responded exactly the same as the last test! This is a very good thing, as it means that the surgery did not cause him to lose any residual hearing that he had in his right ear!

According to the readings of our therapist, Aarav's audition and understanding has covered up quite well. The gap between his actual age and his hearing age is now very less. He understands and behaves exactly like any normal hearing 2.5 year old should. So Audition- wise we are in a good place.

Expressive speech always comes a bit slowly with respect to audition. And if we are to evaluate Aarav's expressive age then he is approximately 9-10 months behind his actual age. But if we compare this to his actual age he has covered up quite well.
Before this report, I made a list of words that Aarav uses and knows and shared it with our therapist. According to my list, Aarav understands approximately 200 words and uses approximately 150+ words on his own.

Now, truth be told, sometimes I think that this number is less and sometimes I think it is more... I made this list overnight and there will surely be more additions, but what Kaustubh and our therapist said, was that we should be counting only those words that Aarav uses without prompting. Words that he uses correctly, in context and on his own. So now I think I need to cut down that list even more.. (or actually test Aarav to get a real count..)
But still even if we do a straight 50% cut on his expressive count we are at 75-80 words that he does use. So that is good.
(Though now that I have thought about testing Aarav, I will be doing that soon anyway. I need this real count now instead of approximations :-P )

In terms of effort and time, we seem to be doing the correct things till now.. but there is always room for improvement.
Improvement not for Aarav, but for us. Aarav did excel our expectations this times well, but we do see a lot of scope for effort inputs to be done by us.
More time reading books. More play time. More talking ..

This is most definitely Rome and just a year of effort in building it is not going to be enough.
We have come a long way in this year and we still do have a long way to go ahead...

Aarav's residual hearing was not lost due to surgery!! He still has some hearing. Profound and insignificant for everyday non-CI use.. but it is not completely gone!

Aarav has done good progress in this year! More positives to look forward to in the coming year!