An evening in the park..

We got the AB Neptune on the 17th August..
And the very next day Aarav and I went to the park to play.. WITH the Neptune of course..

Aarav wore the Neptune outside for the first time.
To celebrate the event.. Aarav and I decided to go green ..
Or Neptune's Lime Green!!

No, thats not him..
This is Aarav.
The Neptune was worn it in the lanyard. 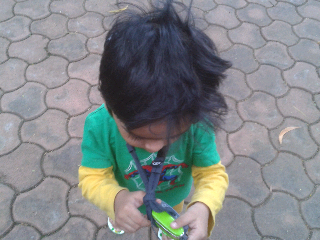 I also learned why the lanyard is not suitable for everyday use for a bouncy naughty boy like Aarav.

And he confirmed my fears when Aarav decided to come down the slide and the Neptune was in between him and the slide. Ouch!!!
But he was much careful than I expected him to be.
Neptune survived unscathed.


Aarav also made a new friend.
Even got her to share her swing by asking her to scoot over again. Of course, It was hard to convince Aarav when she wanted to share Aarav's photo space. 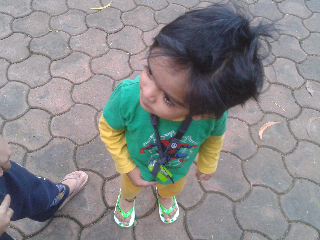 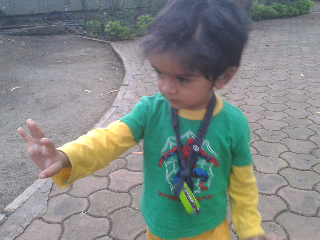 But I insisted that he share, so then he had to changed his mind. 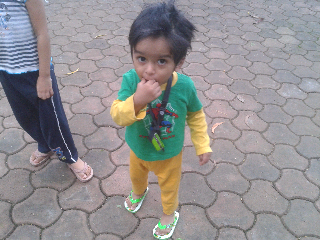 And showed her the camera. 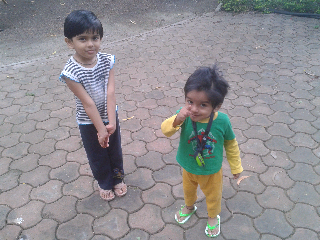 I had a different experience on that day in the park..
There were a few other kids too playing and Aarav went to join them and played with them for a while.
As the Neptune was visible the kids got curious. This is the discussion that ensued.

Kid 1 - What is he wearing?
Kid 2 - Its a torch. (Neptune's green indicator lights were blinking when we spoke!!)
Kid 1 - But its bright here. Why is he wearing a torch?
Kid 2 - Because it will become dark at night, so.

Kid 1 - (amused and interested... mostly jealous..) Can I also try and hear from the machine once? I want to wear it and see what I hear..
I - I don't think we can do that... Its pasted to his head, see?? It can be removed only when he sleeps.

(And then she ran to her mom to explain Aarav's magical hearing machine that helped him hear birds and music.)

Kids have such pure beautiful minds!!!