A Night under the Street lights!!


Preface:
This midnight story is the result of Aarav refusing to sleep anywhere indoors.


The Story:
The sunny Tuesday morning started at 7:00 IST. Aarav, Kaustubh and I went to KEM hospital for Aarav's speech therapy. Once the therapy was done, Kaustubh dropped Aarav in the daycare and went to office. And I took a rickshaw directly to my office from the hospital. Usually with all the running around to do, Tuesdays are very tiring days.


Came evening, Kaustubh picked Aarav up and went home.
I, on the other hand had to visit a few doctors, two fingers of my right hand have very recently opened up, literally, and the skin shrinks, dries and bleeds ever time I have anything to do near water.
To help out with Aarav and to spend time with him, my Mom had come over as I was at the doctors and Kaustubh had to work.


7:15pm:
Sitting in the doctor's waiting room.
Tring trinngggg.
Yes?
Mya aaj nai yete, Lonavlyat adaklie pausat. (I am not coming today; I am in lonavala blahblahblah not coming today)


Aaaargh!! Maid not coming? So I have to go home and cook today with a blood splattered right hand?!?


The doctor's appointment took time and thankfully my bloody hand was nothing more than an allergy. (Whev!!)
Apparently "Bartan ka sabun" (the utensils soap) disagrees with my skin and the skin simply dissolves ever time I wash utensils, leaving behind direct contact with the veins and thus the blood. A gruesome spectacle to see.


9:15pm:
Home, and really tired.
After having spent absolutely no time that evening with me or Kaustubh, Aarav wanted time with us.
He was in a good mood and wanted to play with me. We did the ling sounds, and other general chatting.
After I had called a few hours back to tell of the unplanned leave of my maid, My Mom had cooked and fed Aarav, so he was full. (Thank you Mom!!). One mouth full. 3 more to go.


10:15pm:
Aarav still wanted to play and there were no traces of sleep. (After all Daddy still hadn’t completed his time with Aarav yet right? While till then, I was a walking zombie and the cooking was still to be done!!). Though after a big poop, I was scared of a big blowout, so I forcefully picked him up to get him washed, changed and in bed.


10:17pm:
Kaustubh too was tired and he had planned to eat and sleep immediately. So he quickly finished his work and scampered out of the room assuming we are in the main room so that he could finish off eating at least before he met Aarav.


And their paths crossed... when Aarav saw Daddy. And wailed out to him as if he they hadn’t met for years!!


We met exactly at that mood moment where I was the cruel evil witch who was about to make Aarav do something he dint want to and Daddy dearest was there to save him, and Aarav began to cry his complaint-cry.


Your baby's call removes all tiredness, doesn’t it??!!
Kaustubh lovingly come close to him....


But the overpowering strength of the after-effects-of-the-last-snack in his diaper made him recoil. Mid way to picking Aarav up he stopped and handed him back to me and said "Better clean and change him, then I'll play with him".


Insult.
That is when the crying started.


The volume of a child's cry is directly logarithmically proportional to the summation of what he wants and how much the parents don’t want to comply.


Aarav's demand for today was clear, I do not want to be cleaned or dressed or made to sleep. I want my daddy to play with me or take me out right now.


I am used to this type of crying (more importantly needed to get the poop out or it would mean more cleaning work for me), so I persisted on and cleaned him up and clothed him. All the while Aarav was still screaming bloody murder.
I quickly finished my job, and before his screams could puncture my ear drums, handed him over to Kaustubh. Now that Aarav had been rescued from me, the crying reduced and he clung on to him like a little infant monkey.


11:30pm:
By now Aarav was in a sleepy state but still dint want to sleep. He was keen on getting his wish granted. And by crying for so long he had already aggravated that blocked nose of his and unnecessarily felt feverish and started looked unwell. I gave him Perinorm and Daddy rocked him to sleep.


Aarav seems to have an internal gyroscope that is working even when he is asleep. Every time Kaustubh tried to put him in bed he woke up and cried to be walked again.


A poor tired Kaustubh desperately needed to rest his legs, suggested we take him for car ride. That usually puts him in deep sleep. We barely hit the road, and Aarav was asleep again!!
Bliss, pure bliss.
To make sure that he is in fact really sleeping well, we stayed in the car for half an hour extra.


Apparently, keeping snotty baby in the upright car seat made him sleep better, so we decided to take the car seat in the bedroom.


12:15am:
We went back home and put Aarav in the car seat on the bed. The gyroscope dint go off, Aarav cuddled up and fell asleep. (Finally!!)
Cooking dinner had been completely forgotten. Thankfully, Rahul, my brother-in-law had already ordered pizza and the three of us hungrily devoured it...


We were about to finish, when we heard Aarav's cry at volume 48.
Oh Shit, he knows it’s not the car!!


He hadn’t forgotten my earlier cruelty to him and again wanted Daddy, and again poor daddy had to walk him to sleep. There went the next half hour.


Kaustubh by now was drop-dead tired and his legs were in P-A-I-N! So he asked me if I could walk him for some time. I took Aarav and barely walked a few feet when Aarav woke up, saw me, looked at Kaustubh and agaaaaaaain the entire cry-cycle began....


Was something paining somewhere??
The ear? The nose? His tummy because of the heavy calorie sweet?


Kaustubh was fuming stares at me because I wasn’t walking him and he realllly needed to take a break (which I too agree but its not like a wife to agree immediately especially when angry over something else); I was reciprocating same back because Aarav wanted him over me and that’s not what any mom wants…
Levels of irritation were growing HIGH!!


To solve it all we decided to go out in the car again.

2:35am:
The second the cool breeze brushed through Aarav's hair, He woke up and was so happy to see the car again!! And he came back to me to allow Kaustubh to take the wheel!!


Oh shit. The car seat is in the house!!


So then, I sat in the backseat and Aarav sat on my lap, and we started the car and within minutes, Aarav was asleep. The fear of stopping the car and waking the baby was so high that Kaustubh kept driving on.


Silence and the cool breeze relaxes the senses and all the petty squabbles Kaustubh and I had melted away.
We decided to rest by stopping the car for some time, also to check if Aarav understands that the car has stopped. So even if he does wake up, all we need to do is to drive again.


3:45am.
After 10 minutes of staring at Aarav, he dint budge.
We decided its best to get some sleep. Kaustubh pushed back his car seat and tried to catch a nap... he twisted and turned and kept stealing stares at Aarav through teeny eyes at every movement he did, but when I yelled, he quietly settled down to get some rest.
Within minutes, he was asleep.


Being an incredible insomniac, I couldn’t sleep all. And with Aarav on my lap, I dint dare to move to get comfortable at all!!


The car was parked on the side of the main Kothrud road. I started staring out the half open window and tried to think about boring things to put myself to sleep.


The road is so wide at this hour.
There are 7-8-11-13-16, 16 potholes in total on this road. Probably more after the rains.
I mentally drove my bike on that road and missed every pothole. How cool if I could do that in real life!!


The rain feels good on the windshield. It is 4 drops per 7 seconds.


Ah look!! Its full moon today! So beautiful!!
If today was Christmas, I would have seen Santa flying across the moon, like in the cartoons.

Oh! Full moon makes Werewolves?! Would there be any werewolves in Pune?


Aaaaargh!! Who is that howling?


Oh. Just stray dogs.
Oh. Well. At least the dogs are being romantic at this hour.


Hmm... in twilight, those two vampires were jumping on trees.
I am being silly. Vampires and Werewolves don’t exist. And if they dare to come here and wake up Aarav, his super powered screeching volume will be an antidote and they will be "were-wolves". Ha-ha.


If I wake up Kaustubh, what would we chat about?!


That’s what it must be like to be stuck in Jurassic park with Velociraptors looking for you. I have the same fear right now. If I move and Aarav wakes up, the Raptor in the front seat will bite my head off. Aargh my leg is dying.


Aarav moved and wanted nothing to do with my lap anymore. So he tried to crawl off!! In the backseat of the car, with the drivers seat all down, He wanted to go sleep alone. So in that little space left he stood on the floor and laid flat on the back seat. And thankfully, he slept again.


And I crunched up and pushed myself in the car door. (Good. The car seat was not present, there was no place left for me to winzip more.)
Shit. I. am. fat.


Why do the cops bother? They should give us their red light. With the number of rounds of the city we have done tonight, I am sure the theft count is going to be nil.


Hmm... What if the cops think we are the thieves and come to see what we are doing?
Will the media also be interested?
If they catch us before 4:30 we could be today's news in the newspaper delivered in 8 more hours!!


What news would it be?


Whrooooooomm and we were back in the garage in 10 minutes...


Now the difficult part. Taking the sleeping Aarav back to bed. 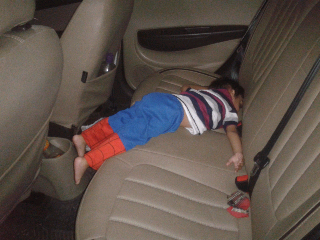 One should let sleeping babies lie....


But being the loving mommy that I am, I definitely dint want to leave him in the car alone, so tried to pick him up and take him home two storeys up, all the while Aarav was asleep but STRUGGLING to crawl at full speed and kicking himself out of my grasp.


I put him in the bed in the next 5 minutes and the lights were put out.


But what about the gyroscope!!?? Aarav woke up again.
(Terror!!! Fear!! We stared at him with petrified eyes!!)
He looked at us but was probably too sleepy from the car ride, looked around, closed his eyes and slept.


Epilogue :
What an eventful night it was. By the time we woke up next day it was 8:30am. And Aarav had finally forgiven me so all was good. We took him to the doctor, got him checked up and it was probably due to the cold causing a headache. Gave him the medicines and he's much better now. Peace and quiet returns back.


Hopefully this movie will not have a part 2.
Posted by Jui Moghe-Shewale at 9:18:00 pm