Aarav's hearing loss was detected when he was 16 months old..

Before that, we had no idea that he couldn't hear, so we never even thought of using any sign language with him..
Whatever sign language we did use, was unintentional and just came as a part of baby talk..

Inspite of no extra effort from us, Aarav has picked up quite a few signs to communicate..
Aarav's most frequently used sign is 'No'.
And he does it in style.

If he doesn't approve of something, he will stare at you straight in the eye, with an annoyed expression, and will sign a big "No" with the pointer finger almost touching your nose.


And to ensure that you do get his point, he will monitor you (literally test and see) for a few minutes later to make sure you don't misbehave and repeat it.. 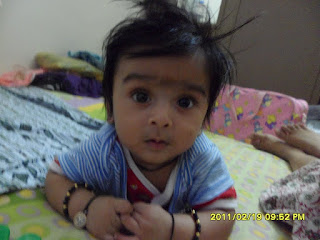 When he is hungry, he comes and sits facing me, and then points to his mouth and to the kitchen, and then he will wait patiently till I get his plate.
He does the same when he wants water, he either points to a bottle or to the water filter or more efficiently holds his thumb like a bottle..

Aarav also does the "wait" sign.. raises his teeny eyebrows and then with both palms facing you till show the stop sign.. (like a traffic cop does)


Then theres the "is it enough??u happy??" sign that comes after any task I push him into doing...

There is self praise when he does something cool. And then he waits for you to appreciate him too..
All of this seems so amazing now, he understands gestures, and read expressions!!!
He even reads eyes, for eg , where you just point to something by just looking at it and then back to him and repeat again, he knows what you want him to see....
These signed communicaitons even most adults miss..

Whether we continue using signs or sign language after his CI is done, will be seen later..
But to realise that Aarav wants to communicate, and that a CI will bring him more options to communicate brings satisfaction that we are on the right track. 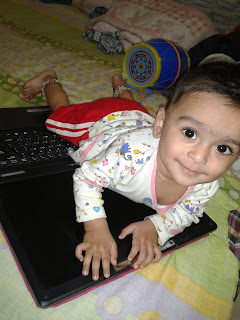 I am not worried anymore.

I am just waiting now for his ears to be switched on..
Posted by Jui Moghe-Shewale at 9:33:00 am